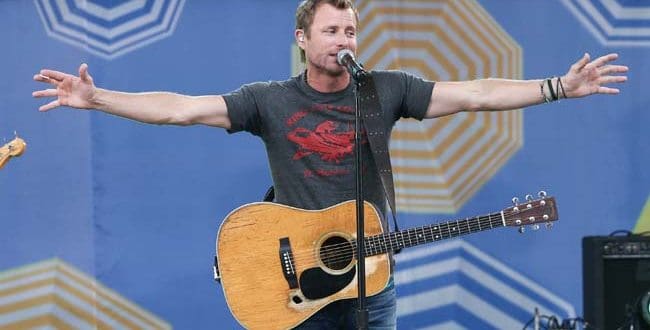 Tonight is the night!

Dierks Bentley and Elle King’s co-hosting skills will be on display tonight as ABC airs CMA Fest, a three-hour special highlighting 30 performances from this year’s four-day CMA Fest event downtown Nashville which took place in June. The CMA Fest special will include performances from Carrie Underwood, Luke Combs, Jason Aldean, Kane Brown, Luke Bryan, Thomas Rhett, and Kelsea Ballerini, to name a few. The CMA’s posted about it on their CMA Instagram page. This was Dierks and Elle’s first time co-hosting the show, and Dierks said he’s grateful for the gig.

“It was so great to be back at CMA Fest especially hosting it. After two years of CMA being away, CMA Fest being gone, those fans came back with a vengeance, so excited to party and hang out, so loud. So, for me to get a chance to not only play the show but actually host it with my buddy Elle King, that is just, I just feel so lucky. That was so much fun and so looking forward to seeing the show air on ABC, and just so truly lucky to have a chance to host it.” – Dierks Bentley

CMA Fest airs at 8 p.m. ET. It will stream on Hulu beginning on Thursday, August 4th.

Here is a breakdown of CMA Fest performances:

Jason Aldean – “She’s Country” and “Trouble With A Heartbreak”
Kelsea Ballerini – “HEARTFIRST” and “half of my hometown”
Dierks Bentley – “Drunk On A Plane”
Brothers Osborne – “Skeletons”
Kane Brown – “Like I Love Country Music” and “One Mississippi”
Luke Bryan – “Kick The Dust Up”
Luke Combs – “Beer Never Broke My Heart” and “The Kind Of Love We Make”
Billy Ray Cyrus and Dierks Bentley – “Achy Breaky Heart”
Russell Dickerson – “Love You Like I Used To”
Wynonna Judd with Carly Pearce – “Why Not Me”
Elle King – “Drunk (And I Don’t Wanna Go Home)”
Elle King with Ashley McBryde – “Ex’s & Oh’s”
Lady A – “Summer State Of Mind”
Lady A featuring BRELAND – “Need You Now”
Dustin Lynch featuring MacKenzie Porter – “Thinking ‘Bout You”
Parker McCollum – “To Be Loved By You”
Old Dominion – “No Hard Feelings”
Thomas Rhett – “Slow Down Summer” and medley of “Get Me Some Of That,” “It Goes Like This” and “Vacation”
Darius Rucker – “Wagon Wheel”
Cole Swindell – “She Had Me At Heads Carolina”
Cole Swindell with Lainey Wilson – “Never Say Never”
Carrie Underwood – “Ghost Story” and “Good Girl”
Zac Brown Band – “Out In The Middle”
Zac Brown Band with Darius Rucker – “Chicken Fried”