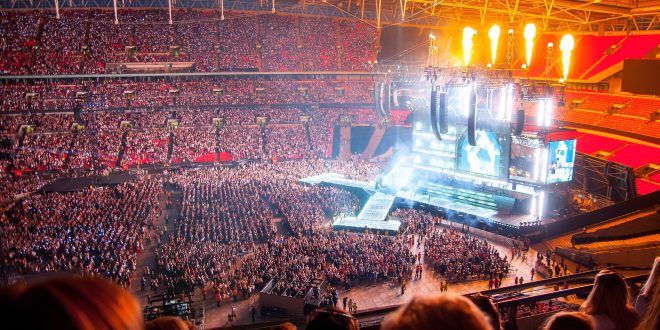 It is no secret Country music can pack some of the largest venues in the world, but you could argue that the king of filling stadiums is Garth Brooks.

But Garth may soon have a contender in rising Country superstar Luke Combs.

On May 21st, Combs will be a first-time stadium headliner at Empower Field in Denver, and he is going directly to some of Country music’s biggest superstars for advice.

”I’m planning really soon to reach out to guys like Kenny, Ed and Garth and say, hey, give me a top five list of something you didn’t know that you wish you did when you started doing the stadiums. What are those things?” – Luke Combs

As far as those big shots Luke says he will reach out to for tips, Brooks should probably be the first call as he has now set two new records in Edmonton. His concert on Saturday, June 25th at Commonwealth Stadium was the fastest sell-out ever with 122,000 tickets sold.

But that’s not all – Garth’s show there on Friday, June 24th is also sold out, making this the “most sold for a tour in history” at the Stadium, according to the superstar’s spokesperson.

“I’m not sure what we are seeing on tour right now when it comes to the record numbers is so much a reflection of Garth Brooks. I believe the people are experiencing the joy of being back where they belong and that is together. I feel lucky to be a part of it.” – Garth Brooks

Erin Hart and Chris Blood of 94.3 KAT Country mornings talked about big Country music stadium shows, and you can catch the conversation below: