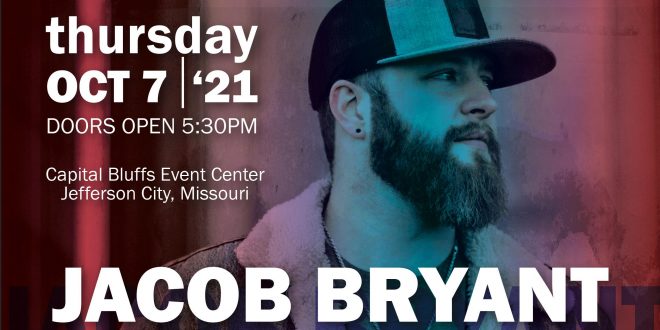 A great night of country music for an even better cause!

Jacob Bryant and David Baker are ready to bring an unforgettable evening of country music to Jefferson City, Missouri, to help raise funds for K9s on the Front Line-Missouri. Doors open at 5:30 pm, with music starting at 6:30 pm.

Listen to Erin Hart’s interview with Jacob Bryant below!

A little bit about Jacob Bryant:

In the space of a few short years, Jacob Bryant has proved himself one of country music’s true outlaw singer/songwriters. But there’s a big heart beneath that tattooed and bearded exterior…

A hard-charging country rocker with a sound that blends the narrative aspects of country with the kick of southern rock, the rural North Georgia native has earned his stripes shedding light on life’s darkest corners, using a booming pure-country baritone to enhance both music and message.

But he’s always filled his songs with compassion and empathy, not reckless abandon, using past experience to fuel creative instincts, as shown on his debut album, ‘Practice What I Preach’. “The album was a great roller coaster ride,” says Jacob. “We finished the recordings only to have the files stolen in a robbery at my producer’s house. Fortunately, we discovered backup files at our mastering guru’s studio so we didn’t have to start again! Two years of work saved!”

After losing his mother in 2010, the budding songwriter battled depression and anxiety, self-medicated with alcohol and cocaine, and ultimately suffered a heart attack at the age of just 19 – but he transformed the pain into passion. Drawing on the music of heroes like Keith Whitley, George Jones, Travis Tritt, and Lynyrd Skynyrd, he quit reaching for the bottle and started pouring himself into songs…“It keeps me alive,” Jacob says of his music. “Living with some of the things I’ve been through if it wasn’t for music I probably wouldn’t be here. It’s a lifeline, it keeps me sane.”

Actually, that lifeline has turned out to be more of a climbing rope…Bryant’s self-titled EP was released in 2014, with the standout ‘This Side of Sober’ introducing an artist who has seen dark times and lived to tell about it. The following year, a song he penned with Jon Lawhon from Black Stone Cherry, ‘Save My Soul’, featured on the ‘Through The Windshield’ EP along with four other cuts, further adding to his story. Building a fanbase who appreciate gritty honesty, Bryant then hit the Top 10 of iTunes’ Top Country Albums chart with his ‘Up In Smoke’ EP in 2016, placed his co-written ‘Out There’ on Luke Combs’ 3 x Platinum ‘This One’s For You’ album in 2017, then turned heads with ‘Practice What I Preach’ in 2020. Released independently in the US, the album debuted at Number One on the iTunes Country chart, widely connecting with fans disillusioned by the manufactured and the mainstream.

In fact, single / video track ‘Pour Whiskey On My Grave’ has now notched up nearly 34 million views and streams, while fans have flocked to nationwide shows – from tiny, hole-in-the-wall bars to an opening spot for Dolly Parton at the legendary Mother Church of Country Music, Nashville’s Ryman Auditorium.

A newly married man and father of a little girl, like his peers, Jacob was forced to cancel touring plans due to current world events, and that has given him something he hasn’t had in years … time. “With being off the road, it’s given me the space to reflect and to grow, to get better as both an artist and a person,” he reflects.

“I go through my daily life searching for normal, and my normal is making music that lets the pain out,” he continues. “A lot of artists don’t talk about what they’re going through, but I want other people to know they’re not alone.”