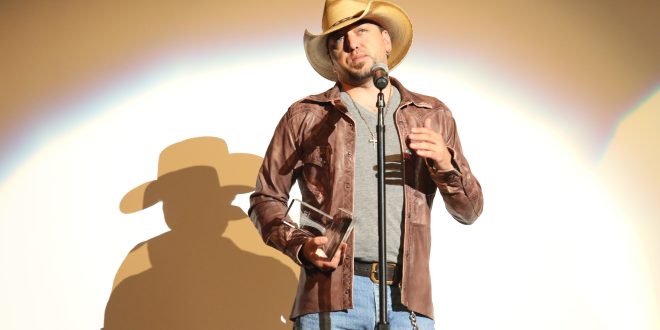 Jason Aldean Is The One To Get The Kids To School

Labor Day is right around the corner, and kids are either already back in the classroom or getting ready to start the school year. As a father of four, Jason Aldean is used to the drill that comes with early school mornings, but he’s enjoying a pretty easy break in the action at the moment.

His oldest daughter, Keeley, is in college, but he has one teenager and two that are still too young for full-time school at home. Jason said that at this time, not much is required of him other than providing transportation.

“Kendyl’s 15 so she still can’t drive, so this morning I got up, took her to school. Luckily she’s at the age now where she comes in, makes her own lunch. She gets herself ready for school, so we haven’t crossed that yet. Memphis starts kindergarten next year, and then Navy will start the year after, so when that happens there’ll be two of them and I’m sure I’ll be doing ponytails and you know . . .  With Memphis it’s easy. I just slap a hat on him and go. You notice he’s always got a backward ball cap? Yeah, that’s cause it’s easy. I don’t know. They’ll make it to school on time. That’s my role in it all.” – Jason Aldean

Jason continues climbing the country charts with his latest single, “That’s What Tequila Does.” It follows up his recent chart-topper, “Trouble With A Heartbreak.”

Jason will be making a stop in Columbia at Mizzou Arena in October! Get your tickets now!