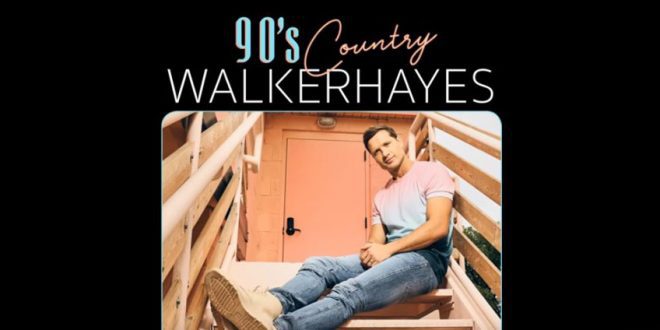 Walker Hayes takes it back to the 90s for a cool new single!!

Last month, Walker Hayes released the ultimate nostalgic country tribute with his new single, “90’s Country.” The epic tune manages to fit in 22 ’90s country references in less than three minutes, but the process was not quite as concise as the finished product.

“It was a tough song to write. We fought. Shane [McAnally] and I fought hard,” Hayes confessed with a laugh during a recent interview with Sounds Like Nashville. “I will admit, I have to be the slowest writer in Nashville. I’m not joking. ‘Craig’ took me three months at least, ’90’s Country’… we put it down for a while and brought it back out.” The whole journey took two years, and nearly a dozen different versions.

“I think there was one version where there were forty-something references, and it was like a minute-long rap of just ’90s country titles or little like nods to it and stuff,” he said with a smile.

But the finished product is well worth the energy spent, and Hayes knows it.

“I love the way [people have] reacted,” he gushed. “One of favorite reactions, I posted it the other day, a friend of mine said, ‘I hate you. This song is in my head. I cannot get it out, and I even listened to Neil McCoy ‘Wink’ on purpose this morning.’ I was like, ‘I love that. It’s what that’s supposed to do is remind you of those days.’”